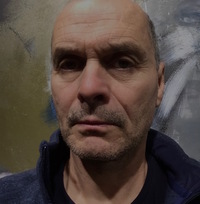 Marc Dimitry Ouellette was born in 1959 in Syracuse, NY. He has Ukrainian and French Canadian roots. He attended SUNY New Paltz until 1983. He then formed a rock band with his brother, performing as sole guitarist in music clubs in Boston and New York City, including the famed Bowery venue CBGB. During that time he worked as a carpenter.

While living in Boston in 1990 working at a Homeless Shelter, he met Christian and Buddhist peace activists who were planning a peace march in Central America to reflect upon the 500 year anniversary of the colonization of the Americas. Ouellette then spent 6 months walking with this group from Panama City, Panama through Chiapas, Mexico. It was during this time that his eyes were opened further to the damage being done in Central America and Mexico, to farmers and the indigenous people, by United States corporations and exploitive governmental policies.

Upon return to the United States in 1992, Ouellette lived briefly in Brooklyn, NY, and was accepted into his first art exhibition at Ward-Nasse Gallery in Soho, where his pen and ink drawings were well received. He then moved with his family to Albuquerque, NM in 1993 where he worked as a carpenter and continued his artwork. In 1994 he exhibited his work at the Kimo Theater Gallery in Albuquerque. A few years later he became represented by Box Gallery in Santa Fe, NM, where he had many solo shows. As well, he was in group shows in Taos and Albuquerque. Ouellette consistently received excellent press. His 2003 exhibition, New Paintings, at Box Gallery, was reviewed in Art Papers by Nikita Storm.

Ouellette was diagnosed with advanced brain cancer in 2003. Since then he has undergone 2 major brain surgeries, chemotherapy and radiation. In addition, he has had multiple hospitalizations related to uncontrolled seizures. In 2008 he was told by his oncologist that the only treatment options available to him would involve dangerous drugs and therapies that would adversely impact his quality of life. He chose instead to pursue alternatives to western therapies to help maintain good health and stave off furthur cancer recurrence. He undergoes MRI monitoring every 12 months.

He lived in the desert Southwest for 20 years with his wife, son and daughter before moving to Asheville, NC in 2012 to be closer to family and to continue his painting career. He currently paints out of his home-based studio.

In his work Ouellette frequently explores issues of western society's over-consumption of resources. This perhaps speaks to deeper issues within the human state of being and contemporary society. He juxtaposes his work that expresses these sentiments in pieces that include figures, barn-yard animals, still lifes, portraits, spheres, landscapes and abstracts.

He names among his major influences Francis Bacon, Odd Nerdrum, Gerhardt Richter, Gottfried Helnwein. Also the Santa Fe-based artist, and his friend, Kathleen Morris has impacted him greatly. From her early Truchas, NM open-air studio she created large canvases that were rich, textural and with color-bold surfaces that touched him as an early oil painter.

Ouellette is a self taught painter who now works mostly with oils. He is self represented. His paintings can be found in private collections in Albuquerque, Santa Fe, San Francisco, Berkeley, Boulder, Chicago, Houston, Dallas, New York and London, England.